Today was a very long and very hot drive. Before I complain about that I’ll tell you about our return trip to Crater Lake National Park. We went last April and it was covered in about 15 feet of snow. We walked around and got some re-created pictures from when we came in April. It was really cool to see it in both seasons. Summer is preferred. 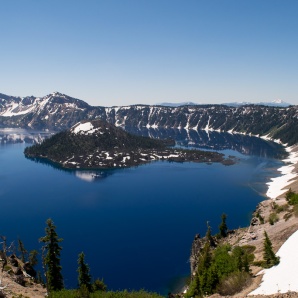 I drove all the way from Bend to Weed, CA. I think its the longest Kirk has ever let me drive. Once we came down from Mt. Shasta though the temperature rose considerably. It was maybe ninety degrees in Weed but by the time we got to Redding it was 107.  We didn’t have a reservation this night either and the thought of sleeping in Goldie in 85 degree heat in a parking lot in Sacramento gave us nightmares. So we caved and splurged on a hotel.

The drive from the rest stop to the hotel was literal hell. Never been that hot in my life. Kirk too. Once we were cooled off in the hotel, we went to Raley Field to watch the Tacoma Rainiers play the Sacramento Rivercats. We lost but the firework show was really good. After that we walked around downtown Sacramento and decided we liked it, enjoyed our time there, but probably won’t go back and would never live there.